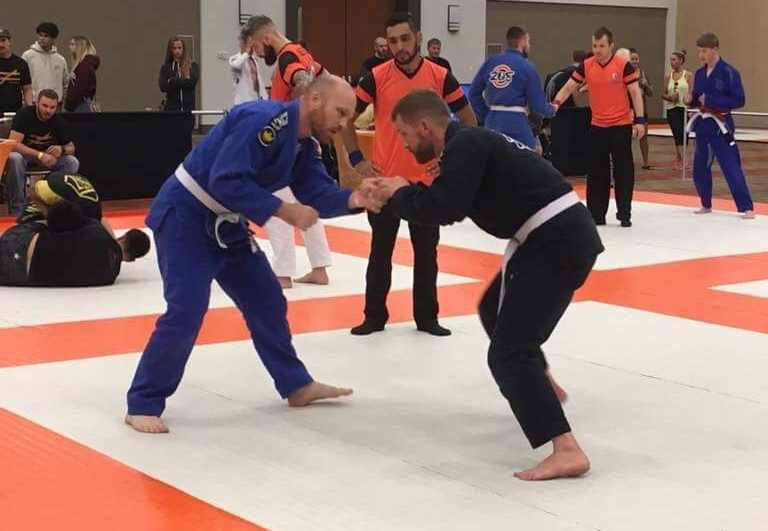 On Saturday, 08/04/2018, I squared off against three good opponents. It was my third tournament in eleven months.

As it is often said in Jiu-Jitsu the world over: You either win or you learn, and on that Saturday – I did a whole hell of a lot of learning. Honestly, I wasn’t sure whether or not I would write about this event, but, I figure that others have or will experience the same things I did, so maybe I can help in some way. At the very least to say, “You are not alone. Keep going.”

The week immediately following the tournament I had lunch with a good friend and teammate of mine. He was actually one of the three opponents I squared off against at the tournament. He knew I’d been having pre-tournament jitters and asked how I was doing now that the tournament was over, he briefly contrasted and compared our rolls in the gym and how I train versus what he saw/experienced on Saturday saying,

“Yeah, when I rolled with you and when I was watching you roll, that wasn’t the Tom I know.”

A few hours after the tournament I had texted our Coach. I was frustrated and a bit…perturbed, to say the least. I hesitated, a lot. I felt like I let him down, let my teammates down, obviously I didn’t meet my own expectations. My performance was not my best. He, as most good Coaches would, went right to the meat of the issue,

“This isn’t a let down, just an obstacle. We’ve got to figure this mental block out. Nobody beat Tom today but Tom… you’re too much in your own head.”

I was too much in my own head, and I had been for some time.

Nobutada: Please forgive; too many mind.

Algren: “Too many mind?”

I “understand” (I think) the answer here. I’ve got to let go and trust in my training, apply my game plan with no mind to anything else and let the chips fall where they may. To quote Bruce Lee,

“The great mistake is to anticipate the outcome of the engagement; you ought not to be thinking of whether it ends in victory or defeat. Let nature take its course, and your tools will strike at the right moment.”

As Morpheous told Neo in The Matrix,

“Neo, sooner or later you’re going to realize, just as I did, that there’s a difference between knowing the path and walking the path.”

Do I want to win? Of course. However, getting to a place where I get rid of this mental block and apply my game plan with no mind is the primary goal. Wins and loses will come along the way.

Another friend and teammate of mine had lunch with me a few weeks after the tournament and he gave me another angle to approach the subject.

“This is just an aspect of your game that needs to be worked on. Some have weaknesses just in technique or whatever. Yours is in your mind. So, it might take you four or five or fifty more tournaments before you fully hone this aspect. But you know what to expect.”

This, whether I like it or not, is a weakness in my game. I have to learn to let go of everything, everything, except the match in front of me.

This will be an interesting time as I evolve to where I want to be as a BJJ player.

Thankfully, I have a good team. Practically everyone from my Coach, to the up and coming white belt who is training five to six days a week and coming at us like a freight train, everyone helps make me better one rep at a time, one roll at a time, one day at a time.

It is definitely different, stepping on the mat at a tournament. I don’t mind that as much as the battle within, and that is the thing I need to conquer most.

*To everyone I quoted, if I slightly warped what you said, obviously going off memory a month or almost two removed from the situation can leave things a bit different than they actually happened. I believe I captured the heart of what each of you told me.

**Hey there! First, I want to express my thanks to you for reading this post. If you find value in what I’m writing or you know someone who would, the biggest compliment I can receive is for you to share this post far and wide: Instagram, Facebook, SnapChat or even E-mail. While you’re at it, leave a comment or two, I’d love to hear your thoughts! Thanks again!**

5 thoughts on “BJJ White Belt: Too Many Mind”